Many States Unprepared for Fair and Free Elections 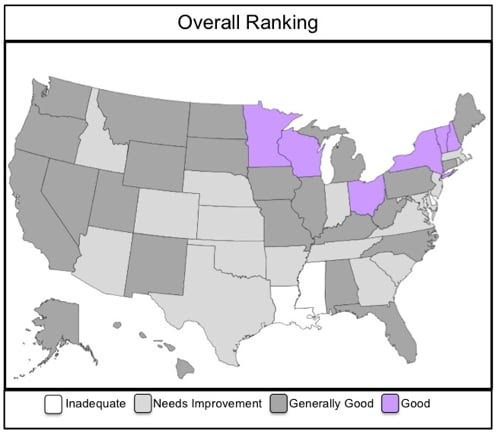 Source: Common Cause, Verified Voting Foundation and Rutgers School of Law.
Common Cause, the Verified Voting Foundation, and the Rutgers School of Law have a new report out on the readiness of particular states for the election in November. The report focuses on the nuts and bolts of voting: do states have back-up methods in case voting machines break? Do they keep paper records of all votes? Do they conduct audits after the election to make sure the count is correct? It doesn’t touch on more contentious issues like voter ID or the ability of released prisoners and other felons to vote.
Minnesota, New Hampshire, Vermont, Wisconsin and, interestingly, Ohio were judged the five best prepared states, and Colorado, Delaware, Kansas, Louisiana, Mississippi, and South Carolina the least prepared.

The report found no states had inadequate measures for dealing with broken voting machines, but that sixteen use paperless voting without any paper receipts, meaning that a verifiable vote audit is impossible. You can read the full report here (pdf).

On , it is highly likely that some voting systems will fail in counties across the country. More than 300 voting machine problems were reported to election protection hotlines during the 2010 mid-term elections, and more than 1800 were reported during the 2008 general election.

Because we cannot  predict where machines will fail in 2012, every
state should be as prepared  as possible for system failures. Vigilance will help ensure that machinery-related problems do not interfere with the right of eligible citizens to vote, or imperil the accuracy of the vote count.  In every national election in the past decade,  computerized  voting systems have failed:

machines did not start or failed in the middle of voting,

memory cards could not be read,

votes were mis-tallied or lost, and more.

What follows  are examples of just some of the more highly publicized problems, only some of which could be resolved by election officials or courts:

be ahead of candidate Al Franken by 215 votes on the basis of the initially reported
electronic tallies.  The close margin in the race, in which almost 3 million votes were
cast, triggered a mandatory recount.  As a result, Al Franken was confirmed to have
won by 225 votes.  The auditable voting system had to be audited fully to determine
the correct election results.

sixteen voters across six counties reported vote flipping on the state’s touch screen direct
recording electronic (DRE) voting machines.  All reported that when they selected
Obama, the machine switched their vote to McCain.  This phenomenon is known as “vote flipping” and there have been a number of cases reported anecdotally over the years.  In this case, some county officials blamed calibration and screen oversensitivity, while others blamed human error, saying the voters were not careful enough in making their selections.

election management software in reported that all computer
cards had been read, even though at least two cards holding ballot totals had not
been uploaded. Ultimately, 200 votes were not counted.
subsequently filed a lawsuit against machine and software manufacturer Premier
Election Solutions, and its then-parent company Diebold, Inc., regarding the faulty
voting systems.   In 2011, Premier and Diebold paid $1.5 million to
settle the suit.

five votes in the City of .  Even though election workers uploaded the memory card and the vote-counting software read the card, the five votes from
Trotwood were not tabulated; the missing votes were only discovered during a
statewide manual audit of the software.

problems, causing their screens to lock up and requiring election officials to redirect
voters to working machines.  A spokeswoman for the elections board reported
that there were approximately 1,600 machines in the field on election day, and that
“there were roughly 1,000 problem calls, about 50 percent of which were calibration
issues of some sort.”

County, , discovered that a software failure added thousands of nonexistent votes to the county totals.  While each precinct reported the correct total, when officials added the tallies of three ballot-scanning machines together, a software malfunction added thousands of votes to the grand total.  Officials had not been keeping a manual tally of the votes cast, but suspected the total provided by the scanners was too high.  The problem was attributed to a software malfunction in the central tabulator; a manual audit revealed the mistake, and officials corrected the results, avoiding a run-off election.

votes for straight Republican tickets to votes for straight Democrat tickets. Election
officials attributed the problem to calibration and noted that they “would prefer to
see a return to paper balloting.”
opened, election workers discovered that the voting machines could not recognize
the security cards, and failed to bring up the ballot on the screen.  Although the
issue was eventually resolved, it caused long delays throughout the county.
a paperless voting machine used in one district attributed votes to the wrong
candidates declaring the actual losers as victors. The county and the Attorney General’s Office acknowledged that the voting machine used in the election switched votes and that it had been programmed incorrectly, and a new election was held pursuant to a court order.

“synchronization” problem with the election management software allotted votes to
both the wrong candidate and the wrong contest; “[t]he results were officially
changed . . . after a court-sanctioned public hand count of the votes.”

These problems come as no surprise to those who have studied election administration in
the . Our elections are so complex, and involve so many jurisdictions, varying technologies, voters, poll workers, technicians and election workers, that problems are inevitable.  And, as the  technology used for elections has become more complicated, the possibility of error has increased substantially.

Thus,  it is necessary to institute procedures that will make it possible for jurisdictions to
detect and resolve  mistakes and malfunctions when they occur. Indeed many of the
problems discussed above either were, or could have been, resolved through the
implementation of the best practices recommended by this report.   Had the paper optical
scan ballots used statewide in not been available to be recounted, someone who lost the election would be representing in the Senate. Had there been emergency paper ballots in ’s polling places with malfunctioning machines, voters would have been able to vote immediately, without having to go elsewhere, and on standard ballots. Had there been no audit in , the wrong candidate would have been seated in office.

This report tries to answer one essential question:  In the event of voting systems failures,
how prepared is each state to ensure that every voter can vote and that every vote cast is
counted?  In doing so, the report discusses in great detail what officials are and are not obligated to do by law, and whether those obligations comport with best practices for running elections.

Although it takes effort and resources to do so, our best practices have already been
implemented in a number of states, with overwhelmingly positive results. The report also
offers solutions to inevitable voting machine problems that can disenfranchise voters.
We hope that this report will serve as a resource guide to election officials and concerned
citizens alike.  Election officials can see what their peers across our country are doing to
make elections secure and reliable.  Similarly, citizens can work with election officials to
implement the best practices discussed in the report.  They can also use the report to identify and help solve problems that might arise this Election Day.
Posted by Brian T. Lynch, MSW at 7/25/2012 02:00:00 PM