A World of Tweets to Analyze the Human Hurd

While we tweet away, other folks analyze our patterns of tweets. Each tweet contains words.  Our words can be counted and analyzed to learn all sorts of things about us, about our associations, about our moods and our thinking. Every tweet is a data point in a data frame that covers the globe. What will come from all this knowledge? How might it be used in the future? These are not idle questions.  We should be giving serious though to where all of this may lead. 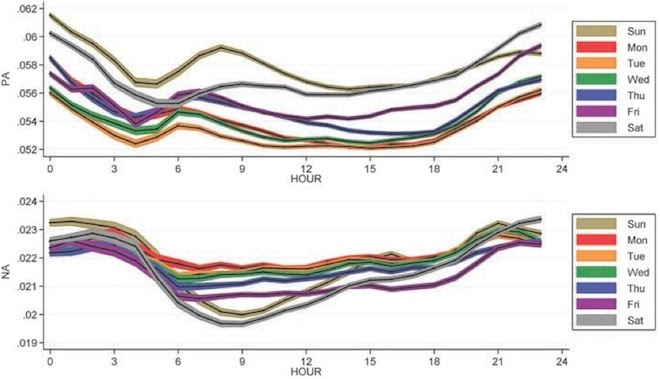 Hourly changes in average positive (top) and negative (bottom) affect, arrayed by time (X-axis) and day (color). (Golder et al./Science)
An analysis of mood patterns distilled from half a billion tweets has produced a civilization-scale picture of how moods rise and fall in tandem, over time and across the world.
The details seem intuitive: positive feelings peaking in the morning, dipping during work and rising at day’s end; negativity accumulated over the workweek dissipating late on Friday afternoon. But they’ve proved surprisingly tricky to measure.
“There’s a whole generation of lab work that’s been inconclusive,” said sociologist Scott Golder of Cornell University, co-author of the tweet analysis published Sept. 29 in Science. “Every study would have something different to say about what they saw in their subjects’ affective rhythms.”
Many studies of how moods — or, more technically, positive and negative affect — change from minute to minute and day to day rely on self-reported surveys, which can be inconsistent if not misleading. The subjects of these studies also tend to be undergraduate students from western colleges, a group that’s not always representative of humanity at large.
New Research Reveals How Africa Tweets
By Beatrice Karanja
http://bit.ly/xC6gpy

The key role of Twitter in the people’s revolutions in Egypt and Tunisia a year ago is well documented. Young people embraced the immediacy and freedom of the new social networking system to escape the constraints of censorship and the security apparatus, to organise and communicate.

The vital part that Twitter played in bringing down these autocratic regimes is already being widely studied. But it has rather obscured the explosion in its use across the rest of Africa.

For Twitter is, by no means, the exclusive tool of political activists in North Africa. It has been adopted enthusiastically by young people right across the continent who are adapting it for their own far more varied daily needs.

These are the findings of the first ever attempt to map comprehensively Twitter traffic across Africa. They are part of a revolution which poses challenges not just for Governments who want a dialogue with their citizens or for businesses who want to talk to their consumers but to everyone for whom communication is important.

Twitter, which started in the United States, may have been in existence for less than six years but it has swept the globe. Over 300 million people took the opportunity last year to use their smart phones or computers to post and read short messages or “Tweets” every day. One in three does so every day, sending over 250 million Tweets – a number increasingly daily.

One of the great things the internets gives us is the ability to track and analyze anything and everything.  You can find out how many people are on your website, commented on your blog, or liked your Facebook status update, and it doesn’t take much more than a few clicks.
Whether you are looking at it from a competitive, professional, or personal point of view, you’ve probably figured out that you should start using Twitter tools to check your stats.
Here are a Twitter analytics tools to help you determine where you are in the Twitterverse:
Klout - Your Twitter presence is graded based on 25+ variables, including how well you engage with your audience, how often your posts are retweeted,  and your level of twitter activity.  Nice tool, measures quickly, and the results actually seem to be useful.
Tweetreach – Based on your last 50 tweets, Tweetreach will show you how many people you’ve reached.  Simple, dead simple.
Twitrratr – Are you constantly worried about the opinion of others?  Twitrratr checks your most recent tweets, and will let you know if they are positive, neutral, or negative.  Just for fun – enter Tiger Woods
Twitalyzer – Need to know what your impact is, or what kind of influencer you are?  Smoking fast results from twitalyzer on 15 day old data.  Slightly longer for real time results.  The most commonly used hashtags is nice as well.
Followcost – How annoying is it going to be to have this person follow you?  Super simple tool to find out what you are getting into by blindly following someone.  Of course, this tool doesn’t measure the quality of the prospective followers tweets, just the quantity.
Have you got a Twitter tool that you can’t live without?  We’d love to know what it is, and why you think it’s the best!
Posted by Brian T. Lynch, MSW at 1/31/2012 07:26:00 AM