Debunking the Myth That It's Your Fault You're Poor

(note: this is the most well liked piece on my blog, so I am republishing it again for those who haven't seen it, nearly everyone, that is.)


The first time I saw a version of the graph below, depicting how worker compensation suddenly diverged from national wealth, I was horrified. My statistical training caused me to see right away that something took place in the mid-1970's to stifle the rise of worker compensation. And the gap between wages and wealth keeps growing every year. I have written several articles about it since, but the implications have still not penetrated our public awareness. 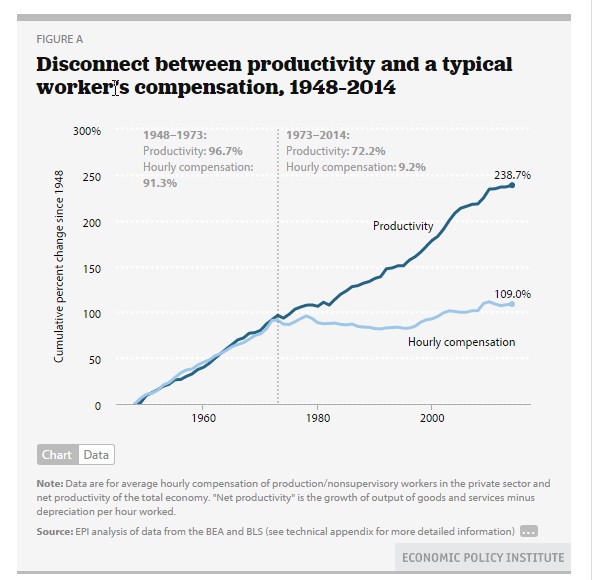 The most recent appearance of this graph was from a report by the Economic Policy Institute confirming some earlier findings of the huge disconnect between worker productivity and worker compensation. I wrote an article summarizing their findings and received a lengthy comment that read, in part:

"Although I agree that the average wage is trending lower than productivity growth, I do not attribute it all to the greed at the top... The question I have is that how much of the deviation from the past are due to changes in society, where the average person has less room to negotiate a better price?"

The commentator went on to suggest the following reasons to explain the growing wage-to-wealth gap:

1. The trend of the two paycheck family led to a weakness in the labor force's ability or need to demand higher compensation.


2. Expanded social service programs and income eligibility caps for aid to the working poor created incentives for workers to keep their compensation low so they qualify for government assistance.

3. Employer fixed benefit packages reduced competition for the affordable healthcare, driving up insurance costs since individuals were not "shopping around" for competitive bargains.
Let's begin with the last point; fixed healthcare benefits. If these were anti-competitive purchases by employers, the rise in employer costs for these programs would correspondingly raise, not lower, hourly worker benefits. The more an employer pays for employee health insurance, the higher the wage compensation is per worker.

Healthcare costs have risen faster than inflation. The reasons for this are many, but the topic is too broad to address here except to say that higher insurance costs led many employers to drop healthcare coverage for their employees. This is a factor contributing to the lower growth in wage compensation. Note, however, that the flood of individuals entering the private health insurance market corresponds with the period of high rising premiums, not lower rates. The collective bargaining leverage of large corporations for competitive health insurance bids was a constraining factor on policy costs.

1. The trend of the two paycheck family led to a weakness in the labor force's ability or need to demand higher compensation.

First, the wage/wealth graph above represents actual, verifiable economic data collected over a span of seven decades. It is not a trend graph, but you can easily imagine superimposed trend lines on it. The first would be a linear line rising steadily upward and to the right representing hourly Gross National Product (GDP). This is a measure of our nations' wealth and it has been steadily growing.

The second trend line, representing hourly wage compensation, would rise perfectly in step with GDP from 1947 to 1973 (which is also the period of rapid expansion of the American middle class). Then it bends sharply (if somewhat erratically) over a seven year period before settling back into to a straight, but much shallower trend line.

What does this mean? It means the social forces that altered wage compensation began abruptly and remained active over a brief period of seven to eight years. The social forces created a persistent structural change in America's hourly wage compensation that remains in effect today. It means that long term social trends don't account for this structural change because they don't fit the data.

Long-term trends present as long slow arches rather than sudden bends in a trend line. This means that the social actions that permanently altered the wage and productivity balance happened quickly and none of the major social trends happening before or since the transition period have had much impact on wage compensation.

The hypothesis that this change was the result of the rise of two paycheck families doesn't fit this pattern. Woman entering the workforce would have had to started abruptly in 1973 and end by 1981. Of course we know that woman were entering the workforce much earlier and the trend wasn't complete by 1981. It is also difficult to imagine how this phenomenon would actually cause a persistent structural change in worker compensation over the decades.

The relatively brief transition, represented in this graph, also rules out other long term trends that are often cited by economists as reasons for lower wage compensation. For example, it's often said that globalization of our economy accounts for the wage/GDP disparity. It is true that globalization affects employment rates and puts downward pressure on American worker incomes, but the trend itself is also a longer, slower process that doesn't fit the pattern. Even the process of shipping business operations overseas took place over a longer period of time. None of the explanations offered by most economists seem to fit the narrow window in which hourly GDP and hourly wage compensation diverged.

Seven years is a short period of time to bring about such a persistent structural change of this magnitude. Something big must have been happening at the time. What was it?

Consider what was happening in the 1970's. This was a hyperactive period for Nixon era conservatives which gave rise to the new conservative movement, also known as the Neo Con's. They laid the groundwork that swept Ronald Reagan into office in the 1980.

This was a time of rapid formation of organized business associations and industry trade groups. This was unprecedented in our history. It was the business answer to the growing influence of organized labor. These associations and trade groups pooled the considerable resources of big business to create the powerful business lobby we have today. They embarked on a massive anti-union marketing blitz to demonize unions and turn public sentiment against them. In 1973 the organized muscle of the newly formed corporate lobbyists got congress to pass legislation creating political action committees (PACs) which gave big business a means to funnel large sums of money into candidates political campaigns.

At the same time, the coordinated collusion of big business, with a nod from business funded politicians, weakened the effectiveness of collective bargaining. Businesses everywhere were emboldened to end the practice of sharing their profits (wealth) with their employees.

In a span of less than a decade nearly all productivity raises ended for most Americans. All the new wealth (profits) generated since then have gone to top executives and wealthy business investors. The "raises" most employees received since this structural changes were merely cost of living adjustments.

Adjusted for inflation, most American families are making today what their parents family made decades ago, yet the nation's wealth has more than doubled. The median income of a family of four today is around $51,000 per year. It would be over $100,000 per year if wage compensation had continued to rise proportionally with the wealth we produce.

2. Expanded social service programs and income eligibility caps for aid to the working poor created incentives for workers to keep their compensation low so they qualify for government assistance.

Regarding the second point about (#2), expanded social services and income eligibility caps creating a disincentive to work: I have addressed this topic in previous articles. This disparaging of social supports for the economically disadvantaged echoes a frequent conservative talking point. It goes by many names, such as the "welfare state" or the "nanny state. " It promotes the idea that there is a giant dependency on social welfare programs.

But this attack on working families distracts from the fact that a growing number of people require government aid to the working poor to maintain basic stability. Their plight is a direct result of lower worker compensation caused by premeditated structural changes in the 1970's. It hides the fact that subsidized assistance to working families allows corporations to have lower labor costs and higher profits. (A government supported labor force is a hidden corporate subsidy.) It dismisses the power of higher wages as a motivation for people to work hard and inspire hope for a better life. It obscures the fact that many companies have found ways to exploit the poor to profit off taxpayer subsidies. Most disturbingly, it blames this suppressed wage compensation on its economic victims.

For a fuller explanation of lower wages on social services, please read "Making the Case for a Living Wage." http://aseyeseesit.blogspot.com/2012/07/making-case-for-living-wage.html