Has Being Human Become a Problem? 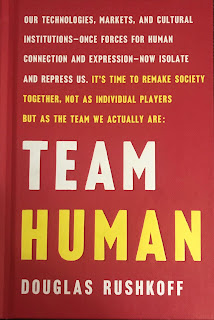 The lengthy subtitle of Douglas Rushkoff book, Team Human, says a lot about the corporate culture of our economy. It reads:


"Our Technologies, Markets, And Cultural Institutions - Once Forces For Human Connection And Expression - Now Isolate And Repress Us. It's Time To Remake Society Together, Not As Individual Players But As The Team We Actually Are."

The exponential growth of our capitalist driven economy and technologies cannot continue accelerating forever. We cannot grow our way out of the negative consequences that ever more rapidly expanding markets and technologies is creating in the first place. The arguments corporate and technology advocates for pushing forward on our current trajectory:

“...never acknowledge the outsourced slavery, toxic dumping, or Geo-political strife on which this same model depends. So, while we can pluck a reassuring statistic to support the notion that the world has grown less violent - such as decreasing probability of an American soldier dying on the battlefield - we also live with continual military conflict, terrorism, cyber-attacks, covert war, drone strikes, state-sanctioned rapes, and millions of refugees. Isn’t starving a people and destroying their topsoil, or imprisoning a nations young black men, a form of violence?” - Douglas Rushkoff, p115, 2019.

The blessings of our growth-obsessed capitalism are not equally shared at any scale of observation. And there is good cause to fear that the “… the blind pursuit of continued economic growth and technological progress [is not] consonant with the increase of human welfare.”

Yet, “…corporations press on, accelerating civilization under the false premise that because things are looking better for the wealthiest beneficiaries, they must be better for everyone. Progress is good, they say… The models would all work if only there weren’t people in the way.”

It has now come to pass that the true believers in capitalism in its current form, and its biggest beneficiaries, are seeking ways to circumvent the obstacles, barriers, and expenses that other humans represent. They seek,”… something [better] to do their bidding with greater intelligence and less empathy than humans.” They are turning to artificial intelligence to solve the human question. They are counting on robotic intelligent design to serve as an evolutionary force that allows machines to eventually replace the work that people do and continue to grow the economy and their profits.

The profit growth imperative is built into all the engines driving our commerce and the economy. In nature, the unchecked growth or expansion of anything leads to its demise. Even the entire universe winks out when its matter becomes is too distant to interact anymore. The inevitable transition to a sustainable economy, sustainable markets, and a sustainable world will not be easy.