The Funding Fight to Save Our Democracy

Total Money Raised So Far in the 2020 Presidential Race 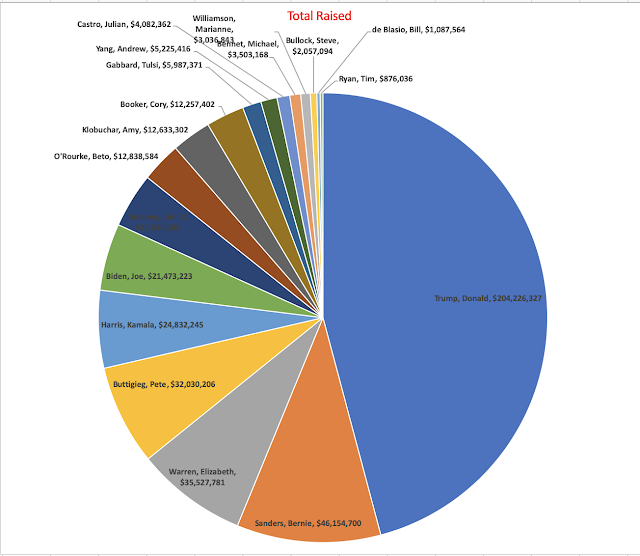 WOW! Here is a pie chart showing how much Donald Trump (big blue slice) and all the Democratic Presidential Candidates raised so far this year. It is clear who the majority of corporate owners and billionaires are backing for President. They are backing the guy who is crazy enough to grant their every government policy wish.  CORRECTION: The billionaires and wealthy corporations are nearly divided between the two political parties. The right-leaning industrial billionaires still back the Republicans while the left-leaning tech billionaires are backing the Democrats. The result is a two-party system in which both parties are under the influence of a tiny fraction of the electorate.  Meanwhile, Donald Trump and his backers are mastering the art of collecting small donations from their base. To date, 61% of Trump's campaign contributions are from individuals giving $200 or less. The NY Times has an article worth reading regarding this shift in funding.

The extent to which corporations control state and federal governments is on the ballot this year, as it has been for 40 years. The difference this year is that there is so much more at stake. Will we finally step up to address climate change in the remaining years over which we can still have a window to effect a positive outcome? Will America continue to be a democratic republic or will we become a fascist-style authoritarian, single-party state? Will we restore our place as a global leader and shining example in the world, or will we become a bully and a pariah among nations? The answers very much depend on the degree to which our next President is not politically compromised or beholding to the ultra-wealthy minority. Our best hope for a bright future requires that citizens collectively out spend billionaires and make politicians financially dependent on us once again.

On the Democratic side of this candidate funding war, Elizabeth Warren has brought in a whopping $17 million from small donors, 48% of her campaign funds. But Sanders is in a different league altogether among Democrats, collecting 60% — $28 million — from small donors. With his many Mainstreet donations, Sanders is the leading fundraiser among the Democratic field. [All pie chart and Democratic small-donor data are from a table and article in Opensecrets.org.]

Bernie Sanders proved we don't need big donors in 2016 and he is proving it again for 2020. We have been duped by the Democratic Party into believing we can't win elections without big donor money and corporate funding. In reality, this is the easy, lazy way to raise cash and the Democratic Party has been losing more elections than they have been winning ever since the Party fell under the influence of big money. And now Trump Republicans are taking a lesson from the 2016 Sanders campaign and going after small-donor contributions from their radical base.

The upcoming challenge after Democrats pick their candidate, as I see it, is whether he or she will be able to run a successful small-donor campaign. Or will the next candidate, and the Party, slink back into the arms of left-leaning corporate donors.  Will Democrats remain under the influence of the big corporation and continue to neglect the issues and need of the vast majority of its base? The latter course is the formula-for-failure that has mostly dogged the Democratic Party for several decades resulting in devastating losses in Congress and in governors races and statehouses across the country.

What this pie chart suggests is that regardless of who wins the nomination, if Democrats want to win the Presidency and an agenda that benefits the majority of citizens, they need to reject big donor money and aggressively engage voters in a grass-roots giving campaign. Democrats and left-leaning independents have to do their part to save our democracy by opening their wallets much wider than they have up to now.
Posted by Brian T. Lynch, MSW at 9/16/2019 06:18:00 PM