Democratic Socialism - Bernie Sanders in His Own Words 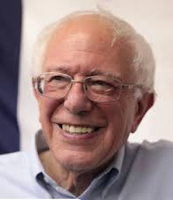 [NOTE: Now that he announced he is suspending his campaign, maybe people will be more willing to see what he as to say. It isn't so radical as it sounds.]

What follows is taken directly from Bernie Sanders's own writing in which he describes what he means when he calls himself Democratic Socialist. He isn't advocating government ownership of the private property or of replacing capitalism with "government ownership of the means of production" as extremists claim on the right. It is more about building on what Franklin D. Roosevelt began almost 100 years ago that remain so popular today. It is about how we must reign in oligarchs and harness capitalism to better serve everyone and not just the rich.

But Senator Sanders expresses it better than most, so, here is Bernie Sanders defining his vision for democratic socialism in the United States...

IN HIS OWN WORDS:

“If there was ever a moment when we needed to stand up and fight against the forces of oligarchy and authoritarianism, this is that time. – Sanders, 2019

· On one hand, there is a growing movement towards oligarchy and authoritarianism in which a small number of incredibly wealthy and powerful billionaires own and control a significant part of the economy and exert enormous influence over the political life of our country.

· On the other hand, in opposition to oligarchy, there is a movement of working people and young people who, in ever-increasing numbers, are fighting for justice.

· When we talk about oligarchy, let us be clear about what we mean. Right now, in the United States of America, three families control more wealth than the bottom half of our country, some 160 million American [while] tens of millions of working-class people, in the wealthiest country on earth, are suffering under incredible economic hardship, desperately trying to survive.

· Today, nearly 40 million Americans live in poverty and tonight [every night], 500,000 people will be sleeping out on the streets. About half of the country lives paycheck to paycheck

· After decades of policies that have encouraged and subsidized unbridled corporate greed, we now have an economy that is fundamentally broken and grotesquely unfair.

· Even while … the stock market and the unemployment rate are strong, millions of middle class and working people struggle to keep their heads above water

· In America today the very rich live on average 15 years longer than the poorest Americans.

· The issue of unfettered capitalism is not just an academic debate, poverty, economic distress and despair are life-threatening issues for millions of working people in the country.

· Across the globe, the movement toward oligarchy runs parallel to the growth of authoritarian regimes – like Putin in Russia, Xi in China, Mohamed Bin Salman in Saudi Arabia, Rodrigo Duterte in the Philippines, Jair Bolsonaro in Brazil, and Viktor Orbán in Hungary

· These leaders meld corporatist economics with xenophobia and authoritarianism.

· They redirect popular anger about inequality and declining economic conditions into a violent rage against minorities — whether they are immigrants, racial minorities, religious minorities or the LGBT community

· In the United States, we have our own version of this movement… led by President Trump and many of his Republican allies who are attempting to divide our country up and attack these same communities.

· The challenge we confront today as a nation, and as a world, is in many ways not different from the one we faced a little less than a century ago, during and after the Great Depression... deeply-rooted and seemingly intractable economic and social disparities led to the rise of right-wing nationalist forces all over the world.

· Anger and despair were ultimately harnessed by authoritarian demagogues who fused corporatism, nationalism, racism, and xenophobia into a political movement that amassed totalitarian power, destroyed democracy, and ultimately murder[ed] millions of people — including members of my own family.

· We rejected the ideology of Mussolini and Hitler

· We instead embraced the bold and visionary leadership of President Franklin Delano Roosevelt, then the leader of the progressive wing of the Democratic Party.

Roosevelt led a transformation of the American government and the American economy… at transformative change opposed by big business, Wall Street, the political establishment, by the Republican Party and by the conservative wing of FDR’s own Democratic Party. And he faced the same scare tactics then that we experience today — red-baiting, xenophobia, racism, and anti-Semitism.

“We had to struggle with the old enemies of peace:

· Today, America and the world is once again moving towards authoritarianism — and the same right-wing forces of oligarchy, corporatism, nationalism, racism, and xenophobia are on the march, pushing us to make the apocalyptically wrong choice that Europe made in the last century.

· The United States must reject that path of hatred and divisiveness and instead find the moral conviction to choose a different path, a higher path, a path of compassion, justice and love.

· It is the path that I call democratic socialism.

· We must take up the unfinished business of the New Deal and carry it to completion.

· [We must commit] committing ourselves to protect political rights, to protecting civil rights – and to protect the economic rights of all people in this country. As FDR stated in his 1944 State of the Union address:

“We have come to a clear realization of the fact that true individual freedom cannot exist without economic security and independence.”


· Now, we must take the next step forward and guarantee every man, woman, and child in our country basic economic rights


In the wealthiest country in the history of the world, economic rights are human rights. That is what I mean by democratic socialism.

“Call it democracy, or call it democratic socialism, but there must be a better distribution of wealth within this country for all of God’s children.”


· We must see ourselves as part of one nation, one community and one society regardless of race, gender, religion, sexual orientation, or country of origin. This quintessentially American idea is literally emblazoned on our coins: E Pluribus Unum. From the many, one.

· I do understand that I and other progressives will face massive attacks from those who attempt to use the word “socialism” as a slur.

· President Harry Truman was right when he said that:

· Freedom is an often-used word but it’s time we took a hard look at what that word actually means. Ask yourself: what does it actually mean to be free?

· Are you truly free if you are unable to go to a doctor when you are sick or face financial bankruptcy when you leave the hospital?

· Are you truly free if you cannot afford the prescription drug you need to stay alive?

· Are you truly free when you spend half of your limited income on housing and are forced to borrow money from a payday lender at 200% interest rates.

· Are you truly free if you are 70 years old and forced to work because you lack a pension or enough money to retire?

· Are you truly free if you are unable to go to attend college or a trade school because your family lacks the income?

· Are you truly free if you are forced to work 60 or 80 hours a week because you can’t find a job that pays a living wage?

· Are you truly free if you are a mother or father with a newborn baby but you are forced to go back to work immediately after the birth because you lack paid family leave?

· Are you truly free if you are a small business owner or family farmer who is driven out by the monopolistic practices of big business?

· Are you truly free if you are a veteran, who put your life on the line to defend this country, and now sleep out on the streets?

· In 1944, FDR proposed an economic bill of rights but died a year later and was never able to fulfill that vision.

· I am proposing an  Economic Bill of Rights… that establishes once and for all that every American…is entitled to the right to:

· At the end of the day, the one percent may have enormous wealth and power, but they are just the one percent. When the 99 percent stand together, we can transform society.

· These are my values, and [this] is why I call myself a democratic socialist.

· At its core is a deep and abiding faith in the American people to peacefully and democratically enact the transformative change that will create...