Honoring a WW II Veteran on Memorial Day - My Dad 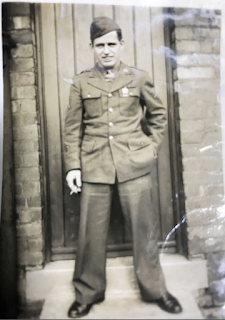 
Peter J. Lynch immigrated to America from Athboy, Ireland, with his mother, Ellen, in 1938 when he was 16 years old. They came to Morris Plains, New Jersey, to locate and reconnect with Peter’s father, Thomas Lynch, who had come here 10 years earlier to find work and support his family back in County Meath.

Peter discovered he had natural mechanical abilities from an early age when he was given a broken- motorbike with a blown engine. He managed to get it running again from spare parts that he walked miles to secure. His success was met with the chagrin of the local constabulary in Kildalkey who sometimes chase the lad about to keep him off the roads. When he and his mom arrived in America Peter landed a job at an auto repair shop in Morris Plains.

Three years later America was at war. Faced with a US Army draft notice, Peter enlisted into the Army Air Corps. He tried to sign up to be in the tank corps, but the recruiter was out to lunch. The Air Corps recruiter grabbed him and convinced him to become a pilot instead. Peter ended up at a flight school in Arizona where he completed his pilot training but then failed to pass his final physical before certification. He was told he was half an inch too short, so the Air Corps assigned him to be a tail gunner in a bomber crew flying the B-24 Liberator. He was disappointed, but this was probably a fateful piece of luck. 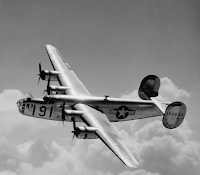 Before his deployment to England, and bombing missions over North Africa, the Air Corps granted Peter his United States citizenship, an honor he lived up to the rest of his life. During WW II it was understood that there was no greater test of loyalty than a soldier who is willing to fight and die for this country. Sadly, this is not the case today. We have many non-citizen combat veterans who are unable to take advantage of the benefits other veterans and citizens enjoy. 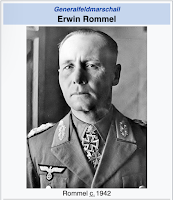 When the United States officially entered the war in Europe in December of 1941, direct military assistance in the North African followed quickly, beginning on May 11, 1942. From his assigned airbase in England, Peter would crawl into the bubble at the tail end of a B-24 in the pre-dawn hours during bombing missions over North Africa. The flights were cold, dark, noisy, and bumpy. The targets were the supply lines and front lines of General Rommel’s panzer divisions. The immediate goal of a tail gunner was to keep up a steady stream of fire when German fighter planes were near so the German pilots would see the arch of tracer bullets and stay clear. As long as his gun didn’t jam this was usually enough to keep the enemy at bay. But the German flack that exploded around them was another matter.


When Peter’s bomber returned to base in England after their North African run he would crawl out from his gun turret and stare in disbelief at the shafts of light where German flack pierced the skin of the aircraft. How long before a disaster? He decided that the odds were against him, so he applied to the Rolls-Royce airplane mechanics school and was accepted. After his training he spent the rest of the war more safely on the ground repairing planes by day and visiting the pubs at night when off duty. But his contribution to the war effort didn’t end there.

Sometimes, on his off days, Peter would watch the other men in his company at work, changing the tires on the B-24s. It was an arduous process involving a team of four to six men with pry bars and sledgehammers to break tire’s seal against the rim and force the tire up over the lip of the rim. It took the men over an hour per tire sometimes. Peter and a buddy of his (sorry, but I don’t remember his name) decided to come up with a better way. They tinkered around in the shop in their free-time until they came up with the world’s first electrically operated tire changer. It was an immediate success and greatly reduced the turn-around time for the U.S. bombers. He was written up in the local Morristown NJ newspaper for this contribution to the war effort, but credit for this invention was otherwise the property of the US government, and he was OK with that. 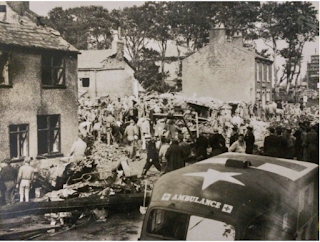 Perhaps the most difficult days of Peter’s service career began on the morning of August 23, 1944. He was stationed at the Base Air Depot 2 - Warton, in Freckleton, England. The base was home to 10,000 American servicemen who worked on fixing and retrofitting US airplanes. As he walked across a field that morning an American B-24 Liberator Bomber flew very low overhead, obviously in serious trouble (It had been struck by lightning in a storm). It crashed just up ahead of him into the Sad Sack Café on Lytham Road. Across the road was the Holy Trinity Primary School where 176 children were in attendance. Part of the bomber crashed into the infant classroom and burst into flames. The crash killed the crew of three and 58 civilians including 38 children. Peter was among the first airman to arrive at this horrifying scene. He spent the next 48 hours straight digging through the rubble of the school to recover the bodies of the children. 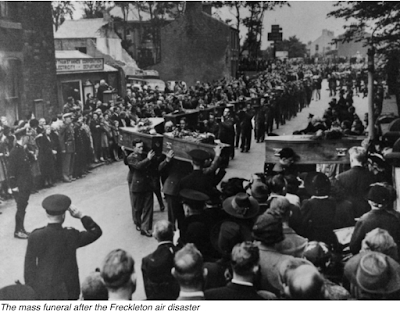 After Germany surrendered, Peter remained stationed there as part of the occupation forces while awaiting the expected redeployment to Japan. That never came as Japan surrendered soon after.

Peter Lynch survived the war and returned home to Morristown, New Jersey. He took a job at Sears and Robuck as an appliance repairman, married my mother, Nona Taylor, and raised two children on a shoestring budget in Jefferson Township, NJ. He joined the American Legion Post 245 in Jefferson where he proudly served as Commander for several years. He died at the age of 60 in 1982 and had a soldier's funeral.

Today, on this 75 Memorial Day since his discharge from the Army Air Corps and 38th Memorial Days since is passing, I wish to honor him with this brief account the years of his youth that he gave in service to our country. Thank you for your service, Dad.