Making the Case for a LIVING WAGE

A conservative friend of mine was astonished to learn that a couple with two children in his town would need an income of  $52,000 per year to live there. “I'm a CPA and I've had partners who didn't make $57,000 some years,” he said.

That actually sounds about right. We have come to the point where a living wage, defined as the minimum hourly income necessary for a worker to afford basic needs, is close to the median family income.  That means that nearly half of all  households are unable to consistently meet all of their families basic needs without some assistance from relatives or from government subsidies.

"Everyone" can't be above average,” he protested.  “If we set the poverty line or living wage standards above the average American income, the government could NEVER provide [enough for the poor].”

First, living wage standards are not set by the government.  They are set by the regional market place where people spend their money and live their lives. Living wages are calculated based on things like the cost of food, housing, clothing, medical care, transportation, childcare and essentials. These family requirements have a free market price tag that varies from place to place.  The poverty line, on the other hand, is an arbitrary federal government measure used to determine who may be eligible for government financial subsidy, among other uses.  It is a single value that does not take local economies into account.

Secondly, my friend's response assumes that it is government’s role to subsidize ’s workforce.  To the contrary, it is, and ought to be, the responsibility of employers and business owners to maintain strong communities and a stable, well compensated workforce.  When families can no longer afford to meet their basic needs in a given location they either migrate to places where their prospects are better or they devolve to survive and the social order breaks down.  Either way, businesses suffer when this happens.  Ultimately, commerce and markets cannot exist without solid communities and a stable, healthy workforce.  When businesses shirk their responsibility to properly compensate employees, governments step in to help stabilize the workforce.  This amounts to a hidden business tax subsidy.

Local communities are the medium from which businesses are created and through which commerce thrives.  When most businesses were locally owned this truth was self-evident.  Local employers took prided in the standard of living they provided their employees.  Business owners were community minded and proud of the beneficial impact they had in their home towns. Conservative Republican values were once rooted in the welfare of local economies.

As businesses became more regional and less dependent on local economies, pressure from organized labor unions helped maintain a reasonable standard of living for the work force.  This helped to keep local economies strong, which was ultimately good for business.  With the rise of national and global corporations, however, the connection between corporate wellbeing and local community wellbeing has broken down.  Large corporations are able to exploit local economies and then move on to new locations when a local economy falters.  Large corporations have the power to control politicians, overcome unions and raise profits by lowering labor costs.  Because of a reduced reliance on local economies for their success, global companies enjoy an autonomy that didn’t exist before.  This has given rise to self-serving corporate cultures and free market philosophies centered around profits over people.  The expansion of the welfare state to bridge the growing gap between lowered wages and rising prices has helped ease the conscience of business owner and investors during the transition to this new corporate culture. And as the middle-class started disappearing, capital owners increasingly blame American workers for the decline.

But the really big point missing here is that median wages have fallen too low in .  The big story, from which all public discourse on the economy seems designed to distract us, is that  American workers need a raise. Incomes have declined substantially relative to the costs of basic good and services.  This decline in American wages is neither accidental, nor inevitable.  The flattening of American wages was done by design at a specific time in our history.  The  graph below shows that the decline in wages corresponds with the decoupling of worker compensation from the rise of hourly productivity.  [see also http://bit.ly/IKDFup]

Based on this graph it is obvious that the rise in hourly compensation dramatically diverged from the rise in productivity per hour in the late 1970’s and early 1980’s.  Hourly compensation has barely risen since then.  This decoupling of wages from productivity coincides with the establishment of industry trade organizations, the creation of extensive business lobbies and a nearly inverse decline in the membership and influence of labor unions. It shifted compensation for growing productivity to top corporate management and wealthy investors. This shift, coupled with dramatic income tax cuts for the rich in 1980 and 1985 are the root cause of the large income inequality today.

While productivity rates increased 250% since World War II, hourly compensation only increased by 130% nearly all of which occurred before 1977. (The tiny increase around 2007 may reflect the increase in the federal minimum wage that year.)  If wages had kept pace with worker productivity since 1977 the median income in today would be more like $100,000 per year.  Extra consumer spending capacity would put upward pressure on prices if that happened, but the relationship between discretionary income and consumer prices is neither linier or direct. In other words, the price of goods and services might be higher, but not in proportion to the increased income.

As mentioned earlier, when families can no longer afford to meet their basic needs in a given location they often move to places where the economy is better. This weakens the local economy when they move out because there are fewer people supporting local commerce. It may weaken the local economies into which they relocate by flooding the labor pool (which drives down wages), increasing housing costs and burdening local social services.   Making sure working families can meet their basic needs is not just the right thing to do, a stable labor pool is critical to local economies.  That’s why government programs to financially supplement the labor pool, especially during economic downturns, are so essential.  When businesses fail to pay employees enough that they are financially self-sufficient, government programs step in to help with housing costs, food stamps, medical costs, etc.

For the past 40 years wage growth has been nearly flat.  Consider the impact this has on government spending and government revenues.  Each year the cost of food, housing and other basic necessities rises.  This means that living wage rates rise faster than our actual earnings.  When worker compensation remains flat, income tax revenue remains flat as well.  At the same time the number of families in need of government financial assistance grows.

Think how much more federal revenue there would be if the median family income today was $100,000 per year instead if nearly half that amount.  Imagine how much less the government would have to spend shoring up low wage workers. If wages had continued to rise on par with productivity over the past 40 years our median income would far exceed current living wage levels.

The case for a living wage has been around for a long time.  In 1891 Pope Leo XIII first described a living wage in terms that could be generalized and applied in nations throughout the world. He said, "Wealthy owners of the means of production and employers must never forget that both divine and human law forbid them to squeeze the poor and wretched for the sake of gain or to profit from the helplessness of others."

Even Adam Smith was a supporter of living wages.  He viewed them as a way to achieve economic growth and equity.  In his Wealth of Nations , Smith recognized that the rising real wages lead to the "improvement in the circumstances of the lower ranks of people" was an advantage to society.  According to Smith, the government should align the interests of those pursuing profits with the interests of the labor force in order to grow the nation’s economy. Smith argued that high wages lead to higher productivity and overall growth.  In this way he linked higher wages with increased productivity.  For much of our history, this alignment has been evident.

Below is a graph prepared by the Secretary of Public Welfare for the State of .  It was designed to show how government financial aid is uneven along the earned income continuum producing illogical "welfare cliffs". However, the graph also reveals the great extent to which working families need government assistance to bridge the gap between what they make and what they need.  The entire area to the left of earned income represents the gap between living wage compensation and what families actually earn. 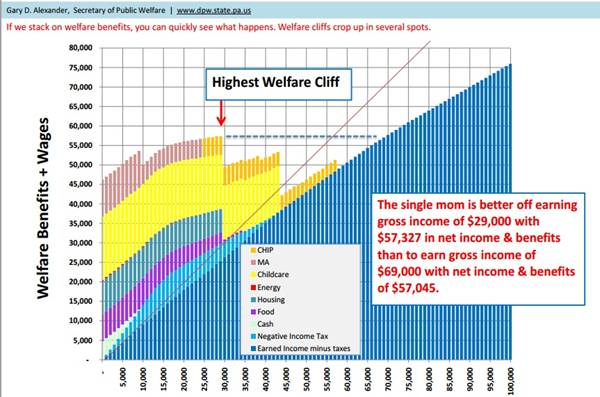 Some examples here might be useful.  First, consider a case where a Pennsylvania company hires a single mom and pays her the federal minimum wage, $7.25 per hour.  Working 40 hours per week, 52 weeks per year, she would gross approximate $15,000 per year.  Subtract income taxes and payroll taxes and she would clear about $13,000 per year. Using the Welfare Benefits and Wages graph above we see she would require an additional $42,000 per year in government subsidy to meet her families basic needs.

The only reason her employer can pay her minimum wage and count on her coming to work every day is because so much tax money is spent to supplement her wages. If there were no aid to the working poor her employer  would have little choice but to pay this woman a living wage.  In this sense, all government aid to the working poor is really a hidden tax break for businesses.

For another example, consider a family of four living in Harrisburg, PA, making a living wage.  Using the Living Wage Calculator  we find that the living wage in  approximately $51,000 per year.  This corresponds to about $24 per hours (more than 3 times the minimum wage).   Subtract payroll and income taxes from the living wage and this family's  net income is around $38,000 per year.  Using the PA Welfare Benefits and Wages graph above it appears that this family might still need some assistance paying for child care if both parents worked, and possibly for health care as well. However, if increases in hourly compensation had kept pace with hourly productivity over the last forty years this same family would be earning more than $100,000 per year. They would be contributing to state and federal revenue rather than being a drain on tax revenue.

If wages had doubled since 1977 (productivity rose 1.5 times) median family wages would  be closer to $48 per hour and as many as 50 million American's who now receive subsidy would instead be contributing to federal revenues.  It is about time we began pressing the case for passing a living wage law.

In many American communities, families working in low-wage jobs make insufficient income to live locally given the local cost of living. Recently, in a number of high-cost communities, community organizers and citizens have successfully argued that the prevailing wage offered by the public sector and key businesses should reflect a wage rate required to meet minimum standards of living. Therefore we have developed a living wage calculator to estimate the cost of living in your community or region. The calculator lists typical expenses, the living wage and typical wages for the selected location.
Posted by Brian T. Lynch, MSW at 7/30/2012 06:51:00 PM