Coup d'état – The Revolution Has Been Televised for Years

The Party of Lincoln is gone. Forever gone. All that remains of it are a nostalgic band of loyal followers around the country who don’t accept its passing and don't see clearly what has taken its place. 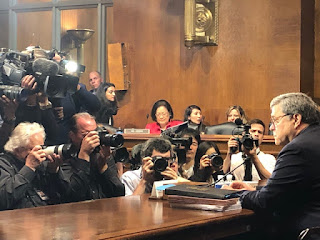 Systematically, over time, and with stealth, the Republican Party officeholders have been replaced by a subversive cohort of politicians hostile to a pluralistic, democratic Republic in which they must share power with others who don’t look, think, or worship like them. Demographic changes over the years have expanded majority opinions to include more ethnic and racial minorities while shrinking the proportion of Eurocentric white voters. Additionally, income inequality has massively increased the power and influence of a tiny number of ultra-wealthy citizens who want a greater say in government. Consider that the top 0.1% own as much wealth as the bottom 90% of Americans yet represents just 238,000 voters compared to 214 million people of voting age in the bottom 90% group. These uber-wealthy citizens occupy a world of business in which they get one vote for each share of ownership, a style of corporate governance that they would happily apply to national governance.

Under these conditions, the industrialist elites have created a Republican Party that is a tightly wrapped coalition of wealthy special interest groups and a disparate collection of disaffected social interest groups with otherwise unpopular goals. Collectively, they are working towards a more autocratic system of government wherein their unpopular ideas can be imposed on the rest of us.

The bedrock of any democracy is the consent of minority interests to accept majority rule in exchange for personal liberty and protection under the law. It is this consent, to abide by the will of the people, that is breaking down in America.

The goal of these democracy-thieves is to take down our Republic and replace it with what could be called a Neo-Republican authoritarian state, or permanent neo-republican control over the government. We have already seen how this works in several Republican-controlled states. An authoritarian, single-party federal government is the only way this coalition of the wealthy elite coupled up with disaffected white nationalists, Christian right fundamentalists, homophobes, and others can impose their will on Americans. Their long-range plans for this takeover have been fomenting for years in places such as the Federalist Society and other ultra-conservative think tanks. The broad outlines of their schemes can be seen in their recent attacks on popular democratic ideas. 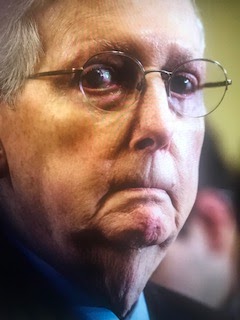 When these Neo-Republicans recently controlled the Congress and the Democrats controlled the Executive Branch, they grossly abused their Congressional oversite authority to disrupt the regular order of government. They blocked or attempted to block all legislative initiatives, even ones they had proposed themselves. They blocked all judicial nominations, especially, and most dramatically, to the Supreme Court. They filibustered every Democratic initiative so that we no longer had majority rule in Congress. When their own will was challenged by filibusters after they regained the majority in the Senate, they ended the filibuster for judicial nominations so they could have their way in making key appointments. They shut down the federal government on several occasions mostly to alienate the affections of the people towards this republic. They loudly pointed to this as proof our system of democratic government wasn't working.  They harassed the popularly elected President, Barak Obama, with endless investigations and obstreperous oversite, which they ruthlessly oppose when oversight is appropriately directed at the most lawless Chief Executive in modern times.

State governments controlled by the Neo-Republicans have found ways to suppress the vote and game the election systems to keep themselves in power. They have drawn up unconstitutional Congressional districts that create safely Republican Congressional Districts for years to come. They passed unconstitutional anti-abortion laws and odorous social conservative legislation to prove their intentions to serve the wishes of the evangelical right and nationalist fringe groups whom they court and pander to for support. In some states, they have subverted democratic rule altogether and appointed emergency managers to take control of distressed cities and towns, usurping duly elected local governments. And in every GOP-controlled state, they have given tax dollars and tax breaks to every corporate interest.

After the Executive Branch came under the control of the Republican Party, with an assist from Russia, the Neo-Republicans ended all Congressional over-site while President Donald Trump has been taking a wrecking ball to our Republic and democratic institutions we so admired. He began installing himself as the first Supreme Executive while breaking every norm of the high office he holds.

Now with Democrats in control of the House of Representatives [May 2019], regular oversite is being restored. But Donald Trump, backed up by Congressional Neo-Republicans, is resisting any oversite activity whatsoever. He is challenging the House’s authority to hold him accountable in any way. He has refused to allow any of his Senior Executive Staff to respond to requests or Congressional subpoenas in his impeachment inquiry. He has refused to turn over any documents or cooperate in any way with Congressional oversight. Then on September 19th, in a federal court filing, Donald Trump, in effect, declared that he is above the law and untouchable by anyone.  When you step back to look at the big picture it becomes clear that we are experiencing a slow-motion coup d'état. 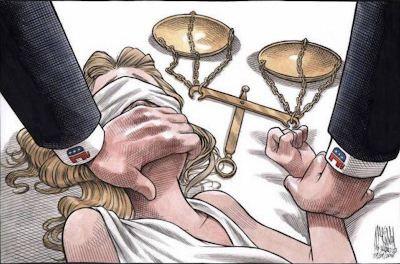 This takeover of our democratic government has been going on for some time. Consider how the Republicans have been blocking all Democratic Party candidates for federal judgeships while packing the Judiciary with their ideological judges when Republicans are in control. Consider how brazenly Mitch McConnell stonewalled President Obama’s pick to replace Justice Scalia for over a year in order to fill the vacancy with a Republican ideologue. He brags about how many young, highly partisan federal judges he has installed in the federal courts.

We have three separate co-equal branches of government. To take control you must control all three branches. At this moment in history, only the House of Representatives is beyond their control.

But there is also the question of the fourth estate, the news media. You can’t get away with taking over control of a government without also taking control of the messaging and public perceptions. Here is where the Republican coup actually got started, after Nixon's impeachment. For a whole generation now, the Neo-Republicans have been building a massive network of alt-right media with a high online presence and lots of toxic, anti-government content.

This alt-right network, the Republican "echo chamber" as Hillary Clinton first perceived it, is now working in parallel with Russian cyber-disinformation activities to continually misinform and arouse the alt-right political base that Neo-Republicans have been carefully cultivated over the years.

So, put it all together and what immerges is a new Republican Party grasping to control all of the levers of power in order to have their way. This new governing party doesn't want majority rule when that includes the votes and opinion of people they don't like; People who don't share their distorted Christian values. Our most trusted democratic institutions, such as the FBI, NSA, the Justice Department, are under siege. They are beginning to crack. The status of the Judicial branch, and especially the Supreme Court to save our democracy is about to be severely tested, and the prospects of salvation from the Court seem murky at best.

Here is how the revolution stands. We have embattled civil servants trying courageously and disparately to hold on to our great democratic institutions and the rule of law. We have one-half of the legislative branch clinging on to our democracy. They are just beginning to understand the fight they are in. They are trying to right the ship of state without the support they were expecting from the Neo-Republicans in Congress. We have the fourth-estate locked in a massive counter-informational battle with alt-right media and foreign powers.

Faced with multiple Constitutional challenges we pin our hopes on a deeply divided judicial system and Supreme Court, hoping that just one conservative Justice will rise above politics to save our Republic. But more importantly, we must rely on ourselves to see more clearly the threats we are under and rise up in mass to preserve majority rule. We must identify and defeat the enemies of democracy, both foreign and domestic.  As Benjamin Franklin once warned us, we have a republic, "... if we can keep it."

------------------------------------------------
POSTSCRIPT: The slow-motion coup d'état described above turned quick and hot on January 6, 2021, when Donald Trump sent both his well-organized hate-group supporters and disorganized rally supporters to storm the U.S. Capitol building to disrupt the certification of the votes that elected Joseph Biden President. Democracy held by a thread but the war has shifted from an outright insurrection to a covert insurgency. B.T.L. 3/7/21