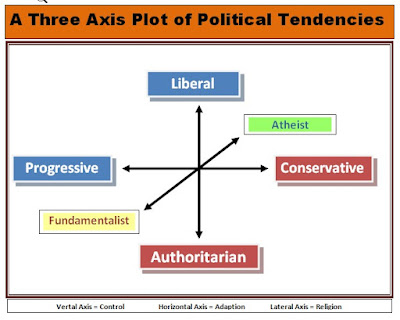 Seeing our polarizing politics from the oversimplified linear perspective has bothered me for many years. The complexities of my political observations never seemed to fit neatly into this left/right dyad.

I set about creating a conceptual framework to describe our politics, one that was was more dynamic. It is a scheme that better fits my real-world observations and, sadly, alerted me to the political dangers Donald Trump represented before many others saw it coming.

I was aided in this quest by something I read. I can't remember where, but the thrust of it was that the opposite of liberal is not conservative, but tyranny. The result is this three-dimensional conception of our politics.

The subsequent exploration of the philosophic origins of the term "liberalism" supplied the insight I needed to identify a separate political dynamic at play in our politics. It was something apart from the left vs. right model we have all come to accept.

In a Huffington Post article in December of 2017, titled "Conservative Is Not Opposite Liberal: That’s Totalitarianism", this same idea was expressed. In that article the author said:


Liberalism is an independent political philosophy, with no inherent connection to either the Left or the Right.

By that point, I knew this to be accurate. The roots of liberalism are independent of the spectrum of social policies along the left/right or progressive/conservative continuum. The liberalism vs. tyranny continuum describes encompasses the wide spectrum of approaches to governing itself.

Using this new axis I created a two-dimensional graph to chart political dynamics. But then being dissatisfied that this two-axis graph didn't incorporate religious dynamics, so much a part of the American polity, that I added a religious axis to the graph to create a three dimensional model of American politics.

What this graphic display allows us to visualize is a three-dimensional space in which we live our political lives. A much-needed definition of liberalism and a few examples will help to explain how this three-dimensional graph works.

Liberalism is a term most people aren’t familiar with because of our colloquial usage of “liberal” to mean “progressive.” I don’t usually use Wikipedia for these discussions, but I like how it frames the terms associated with liberalism:

“Liberalism is a political and moral philosophy based on liberty, consent of the governed and equality before the law. Liberals espouse a wide array of views depending on their understanding of these principles, but they generally support free market, free trade, limited government, individual rights (including civil rights and human rights), capitalism, democracy, secularism, gender equality, racial equality, internationalism, freedom of speech, freedom of the press and freedom of religion.”


So, the opposite along the Liberal Spectrum are those political figures who would oppose these freedoms and the rights of individuals. Leaders who oppose all these things are classified as tyrants and authoritarians. At the time that I wrote about this, I had to use infamous figures in history to provide examples of authoritarian tyrants. Today, unfortunately, we only have to look to Donald Trump, Mitch McConnel and the ironically named Freedom Caucus in Congress.

The “consent of the governed” is another interesting term. On one hand, it implies that we allow politicians to represent our voting interests in Congress, but more importantly, it implies that we accept the majority opinion of those representing us. In other words, we accept majority rule as long as the majority opinions don’t infringe on our individual rights, personal freedoms and our equality under the law. This aspect of our republican form of government is most at risk in recent days.

So, with all of this in mind, we can place a point anywhere in this three-dimensional graph and pinpoint where a politician or a political system stands across all three dynamic spectrums. We can see for example that a politician can be a liberal-conservative and a moderate in his/her religious beliefs. Another can be a progressive authoritarian and very anti-religion, much as a former Soviet communist. Someone like Bernie Sanders might be both progressive liberals with moderate religious beliefs who is very unlikely, because of his liberalism, to support a fair and competitive version of capitalism that works for everyone. You can identify Donald Trump as a moderate to strong conservative (wildly fluctuating) who is radically authoritarian and probably much closer to an atheist than to a fundamentalist.

More importantly, we have to protect our liberal form of government from candidates who threaten it in the future. We have to judge future political candidates along all three political continua to determine their fitness for office. For example, where a conservative Republican candidate falls on the progressive/conservative spectrum must be judged along with where they fall along the liberal/authoritarian spectrum and the religious intensity spectrum as well. And yes, there is such a thing as liberal conservatives, but in our one-dimensional model we label them "moderate Republicans" don't fully see the danger signs when they are banished from the Republican Party. Likewise, liberal progressives should avoid supporting candidates who hold their social policy beliefs but stray too far from liberal views on governing. What democratic societies must avoid are political candidates on the right or left politically who can't abide by liberal democratic principles of governance. We shouldn't elect tyrants just because the can best enact our progressive or conservative policies. And we shouldn't elect religious zealots to enforce morality codes at the expense of our liberal form of government either.

So, once we succeed in reaffirming our democratic republic, we must adopt a more sophisticated system to identify and judge the worthiness of political candidates and elected leaders. We must never again be beguiled by the simplicity of a single dyadic continuum to judge our politicians or our own political tendencies.
Posted by Brian T. Lynch, MSW at 2/23/2020 10:54:00 PM

Email ThisBlogThis!Share to TwitterShare to FacebookShare to Pinterest
Labels: politics