Why Democrats Should Care About People Who Don't Vote 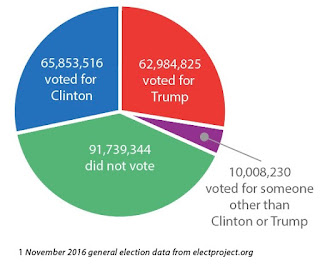 Both political parties in America, along with virtually all television pundits and political opinion polling companies focus entirely on 60% of likely voters. We all ignore 40% of potential voters who don't vote. Polling surveys commissioned by both the Democratic and Republican Parties are always predicated on some variation of likely voters. The results are then grise for the mill of television and newspaper commentators and political party prognosticators. And so it is settled wisdom that all of our elections boil down to 7% of likely voters who are also the swing voters among us. Rightly or not, these much fawned over swing voters are considered most independent voters with centrist political ideology. These swing voters have a disproportionate influence over electoral strategies and policy positioning. As a result, we never hear from those who are disillusioned with politics.

The conventional wisdom is that these non-voters don't care about politics, but it is equally true that the body politic doesn't care about these non-voters. We have come to the point where non-voters are the largest block of eligible voters in America. But are they really unreachable? Or are they justifiably disengaged because they are neglected by both the Democratic and Republican Parties? What is the potential for re-engaging this huge block of the electorate, and which political party has the most to gain? Which of our current Presidential candidates have the best shot at reaching out to these non-voters? And who are they anyway?

Why Democrats should care more about non-voters than swing voters

·      Among likely voters, there are about 10 million swing voters or 7% of all likely voters according to Nate Silver at FiveThirtyEight

·      The 64.2 million non-voting Democrats, left-leaning or neutral eligible voters represent over 6.4 times the number of swing voters in the 2016 election

·      This compares with 65.9 million Democratic votes for Hillary Clinton in the 2016 election

Who are the eligible voters that are not engaged in voting?

By far, the largest number of eligible non-voters are people who once made up the base of the Democratic Party. They are citizens for whom the rightward and upward shift of both political parties over the year has left them without a voice in government. It is not only the right thing to do to reconnect with these less-fortunate Americans, but it is also in the best interest of the Democratic Party and the Nation. These disillusions, often angry citizens are most vulnerable to the nationalistic authoritarian appeals to which they are being targeted.