My Guide to Recognize Fascism When I See It

"The first truth is that the liberty of a democracy is not safe if the people tolerate the growth of private power to a point where it becomes stronger than their democratic state itself. That, in its essence, is fascism — ownership of government by an individual, by a group, or by any other controlling private power."

In preparation for my last article, "It Has a Name: FASCISM",  I read different views on the nature of fascism. As I read I was struck by two facts;

1) There is a lack of scholarly consensus on the nature of fascism, and

2) Despite this shortcoming, the picture that emerges provides insight into the ultra-conservative political transformation, we have experienced in the last few decades.

I recognized that while it takes root on the fringe of right-wing politics, elements of it have been integrated throughout our politics.  Manifestations of fascism have surfaced in many of our institutions over time both in government and in some social institutions. To see this more clearly, a coherent description of fascism would help, one that accounts for its less obvious developmental stages over time.

I wanted to find the common denominators in the various descriptions using Wikipedia's, Definitions of fascism page. It includes contributions from political philosophers such as Umberto Eco, Georgi Dimitrov, Emilio Gentile,  Stanley G. Payne, and many others.  I found the fascism entry from the Encyclopedia of Marxism particularly useful and a good format off which to work.  What follows is my own compilation of the words and ideas from these original authors. Some of what follows are verbatim, some paraphrases and some reworked to combine similar ideas by different authors.  It isn't strictly my original work,  so please don't credit me or accuse me of plagiarism because it isn't properly attributed.  All references to original statements can be found by comparing the texts to the Wikileak's Definitions of fascism site.

To quote myself from my last article, "Fascism may take different forms as it metastasizes, but it is always built on three legs: A ruthless authoritarian leader, an extremely nationalistic base and a loyal cadre of uber-wealthy crony capitalists. The goal of fascism is always the same, to optimize power and prosperity for the fittest members of society, as defined by those aligned with their leader. 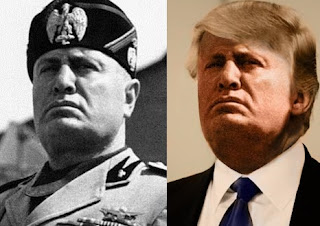 Mass Movement: Fascism derives public support by creating a mass movement with multi-class membership in which prevail, among its leaders and the militants, middle sector members who are mostly new to political activism. The movement organizes as a militant political body or political party whose identity is not based on existing social hierarchy or class origin, but on a sense of fellowship with other members of the movement. Movement identity is often cultivated through a campaign to raise fear of differences between the dominant social group and minority groups within the society. Fascism seeks to exploit and exacerbate social division, often in the form of racism or an appeal against foreigners and immigrants. Members believe themselves to be invested with a mission of national regeneration, consider themselves in a state of war against political adversaries aimed at conquering a monopoly of political power by use of all available means. In this way, fascist movements are able to gain power and political control, even by electoral means, without broad public consensus. Ultimately, a mature fascist state usurps democratic rule and the rule of law.

Authoritarian Leadership:  Fascist states come into power through an authoritarian, charismatic leader whose thematic speeches and theatrical rhetorical style evoke the strongest possible emotions among their loyal followers.  All fascist states have authoritarian leaders, but not all states with authoritarian leaders are fascist states. What most distinguishes fascist authoritarian leaders from other authoritarians are their methods and means to gain and hold on to power, political power for personal gain and self-aggrandizement being their primary interests.  Fascist leaders are obsessed with their adversaries, real or imagined, often resulting in the hyping-up of enemy threats. There is an ethic in fascist administrations that action for action's sake is a sign of strength while deliberation and consultation are signs of weakness.  Once in power, fascist administrations move to make structural changes in both social and government hierarchies to consolidate power and strengthen their control.  Fascist authoritarian leaders see themselves as dominant and superior people, qualities that entitle them to lead others by autocratic rule. They often exhibit narcissistic traits and usually inflate their own talents, accomplishments and moral authority.  Fascist leaders fundamentally distrust democratic institutions and principles. They hold themselves out as the ultimate interpreter of the popular will.

Loyalty: Fascism demands extreme loyalty to the national leader and his loyal followers. "Disagreement Is Treason" – Fascist movements devalues intellectual discourse and critical reasoning as barriers to action and threats to leadership. Fascists, therefore, delegitimize democratic institutions and accuse them of "no longer representing the Voice of the People." Public discourse takes on a militancy. Bullying, harassment or aggression is often directed at people or groups perceived as disloyal.

Nationalism: Fascism places a very strong emphasis on patriotism and nationalism. It is a xenophobic form of Nationalism that is fearful of disloyalty and sabotage from marginalized groups living within the country and especially distrustful of foreigners and immigrants.  Criticism of the nation's main ideals, especially in matters of war and the military, is lambasted as unpatriotic at best, and treason at worst. Fascist propaganda messaging broadcasts threats of attack, while justifying preemptive war. It invariably seeks to instill in its people the warrior mentality: To always be vigilant, wary of strangers and suspicious of foreigners.

Right Wing: Fascists are fervently against Marxism, Socialism, Anarchism, Communism, Environmentalism; etc. – in essence, they are against the progressive left in total, including moderate lefts (social democrats, etc). Fascism is an extreme right-wing ideology, though it can be opportunistic. It often embraces social conservatism and traditional values while rejecting or exploiting libertarian or core conservative principles when it is to their benefit.

Hierarchy: A fully developed fascist society is ruled by a righteous leader, who is supported by an elite secret vanguard of wealthy capitalists. Democratic institutions are restrained and mass media falls under state control and all forms of dissent is suppressed. Hierarchy is prevalent throughout all aspects of society – every street, every workplace, every school, will have its local demagogue monitoring and pressuring for loyalty to and conformity with the fascist regime. The absolute power of the social hierarchy prevails over everything, and thus a totalitarian society is formed. Representative government is acceptable only to the extent that it can be controlled and regulated. Any who oppose the social hierarchy of fascism can be imprisoned or executed.

Anti-equality: Fascism loathes the principles of economic equality and disdains equality between immigrant and citizen. Some forms of fascism extend the fight against equality into other areas: gender, sexual, minority or religious rights, for example.

Religious: Fascism contains a strong amount of reactionary religious beliefs, harking back to times when religion was strict, potent, and pure. Nearly all Fascist societies are Christian, and may be supported by Catholic and Protestant churches. In more recent times, fascist ideology is often supported by the fundamentalist Christian right.

Capitalist: Fascism does not require revolution to exist in capitalist society: Fascists can be elected into office (though their disdain for elections usually means manipulation of the electoral system). They view parliamentary and congressional systems of government to be inefficient and weak, and will do their best to minimize its power over their policy agenda. Fascism exhibits the worst kind of capitalism where corporate power is absolute, and all vestiges of workers' rights are eliminated.  Fascist states develop a corporative organization of the economy that suppresses trade union liberty, broadens the sphere of state intervention, and seeks to achieve, by principles of technocracy and solidarity, the collaboration of the 'productive sectors' under control of the regime, to achieve its goals of power, yet preserving private property and class divisions,

War: Fascism is capitalism at the stage of impotent imperialism. War can create markets that would not otherwise exist by wreaking massive devastation on a society, which then requires reconstruction! Fascism can thus "liberate" the survivors, provide huge loans to that society so fascist corporations can begin the process of rebuilding.

Voluntarist Ideology: Fascism adopts a certain kind of “voluntarism;  They believe that an act of will, if sufficiently powerful, can make something true. Thus all sorts of ideas about racial inferiority, historical destiny, even physical science, are supported by means of intimidation or violence, in the belief that they can be made true. It is this sense that Fascism is subjectivist. Fascism also employs and promotes an impoverished vocabulary - "newspeak" - in order to limit critical reasoning.

Anti-Modern: Fascism loathes all kinds of modernism, especially creativity in the arts, whether acting as a mirror for life (where it does not conform to the Fascist ideal) or expressing deviant or innovative points of view. Fascism invariably burns books and victimizes artists; Artists who do not promote the fascists' ideals are seen as “decadent.” Fascism is hostile to broad learning and interest in other cultures since such pursuits threaten the dominance of fascist myths. The peddling of conspiracy theories is usually substituted for the objective study of history.
Posted by Brian T. Lynch, MSW at 3/15/2017 06:46:00 PM