In an opinion piece by Paul Krugman, published by the New York Times on January 21, 2020, Krugman writes, “The Sanders campaign has flat-out lied about things Biden said in 2018 about Social Security… The last thing we need is another president who demonizes and lies about anyone who disagrees with him, and can’t admit ever being wrong.” 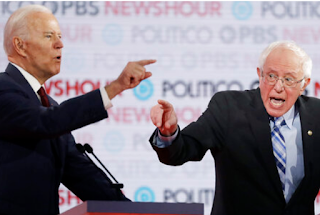 That is pretty damning. What did Sanders or his team actually do?

Krugman writes that the Sanders campaign promoted a doctored video clip that distorted Biden’s record on Social Security. He repeated a quote from another N.Y Times article from January 18th (and updated Jan. 21st) by Katie Glueck’s that said:


“There is a little doctored video going around,” Mr. Biden said, adding that it was “put out by one of Bernie’s people.”

In fact, the video clip linked to Krugman’s article is an unedited segment of an interview from January 7th between Senator Sanders and Anderson Cooper. While listing differences between Biden and himself, Sanders said:


“You know, Biden has been on the floor of the Senate talking about the need to cut Social Security, or Medicare, or Medicaid.”

That’s it! Sanders didn’t say exactly what Biden said or when he said it. Krugman’s comments about a doctored video, therefore, appear to convict him of the same false accusation that he accuses Senator Sanders of committing.

But in fairness to the truth, the released Sanders’ campaign materials Krugman refers to did make some misleading claims. As pointed out in the PolitiFact article linked to the Krugman article, item #1 on the Sanders campaign document said:

So, from where did this accusation come? It came from the Congressional Record of the U.S. Senate, as did another article on the subject in the Intercept written by Ryan Grim on January 13, 2020. The lead sentence of Grim’s article reads:


“AS EARLY AS 1984 and as recently as 2018, former Vice President Joe Biden called for cuts to Social Security in the name of saving the program and balancing the federal budget.”

Grim then cites this excerpt is from the Senate Congressional Record just fifteen-years ago:


“When I argued that we should freeze Federal spending, I meant Social Security as well. I meant Medicare and Medicaid. I meant veterans benefits. I meant every single solitary thing in the Government.”

In this case, it is Ryan Grim who distorted Biden’s record by taking it out of context. Biden was arguing that the budget sequestration under discussion should include all areas of the federal budget and not exclude the very popular and vital entitlement programs. In this same Congressional Record transcript, then-Senator Biden went on to say Social Security, “…is arguably the most important and most depended-upon program in the Federal Government.”

Joe Biden suggested taking Social Security off of the Federal Budget. He wanted to protect the billions of dollars in surpluses it generated each year back then, surpluses that Congress spent every year to cover deficits in other areas of the budget.

What this manufactured controversy misses, however, it the very significant point that the thrust of this and so many of Biden’s speeches always center on the middle-class. Biden has rarely ever focused on 45% of all Americans who live below middle-class economic standards.

This is the real distinction.  Joe Biden is interested in maintaining stability in America by growing and sustaining the middle-class. Bernie Sanders, for his entire career, wants to bring hope and relieve the structural economic burdens of every American family living in or below the middle-class. It is this focus and message that is beginning to resonate in places around America where Biden's message just doesn't carry. It is this focus on economic inclusion for all segments of society that scares the heck out of the wealthy elites.

Here is one example of Biden's middle-class messaging. In his 2018 speech at the Brookings Institute, also cited in the same PolitiFact article to which Krugman linked his opinion, Biden said, “Folks, we’re here today for a simple reason: to talk about the middle class.”

He later goes on to describe the plight of a factory worker to make his point:


“Folks in the middle class are in trouble. It’s not just their perception. They are in trouble. Now it’s all about taking care of the folks at the top… take that guy working on the assembly line making 51 grand. We don’t talk about him anymore, by the way, if you notice politically. Not you, we in politics don’t. And his wife is a hostess at a nice restaurant, she’s making 28 [grand]. So they’re making almost 80 grand and they’ve got 2 or 3 kids, and they can’t make it if they live in Washington or New York or San Francisco.”

No one can seriously argue that the middle-class is in trouble in "high living" places like San Francisco and New York City, but how does this limited message resonate with half of all Americans in far-flung places who make way less than $80,000 per year. Wouldn't they love to have the financial problems of these middle-class families? What they get instead is a conspiracy of silence from politicians in both parties who are beholden to the donor class. These are many of the same families that responded to Donald Trump in the 2016 campaign. He spoke directly to them and they love him for that.

The real question before us now is which Democratic candidate for President has the message and credibility to take back that momentum?  Who has the spark to inspire the working poor to turn out and vote for the Democrat? It isn't the loyal base who needs to be motivated. They will "vote blue no matter who"(if we can believe that). It is the great mass of inactive voters we have been ignored for decades who will sweep Donald Trump and his Republican sycophants out of office if we offer them real change.

This reads as a companion article to one I wrote on the differences between Senator Elizabeth Warren, who I admire, and Senator Bernie Sanders, who I support at this time. In the Studebaker article I linked to that post the differences between Biden, Warren, and Sanders are discussed. That post and two important articles can be accessed here:
https://aseyeseesit.blogspot.com/2019/08/differences-between-warren-and-sanders.html