A Solution to "Sh*t-Life Syndrome" in America

I shared on Facebook a recent article at the CounterPunch Website by Bruce E. Levine titled, “Sh*t-Life Syndrome,” Trump Voters, and Clueless Dems. I got back a surprising question from a conservative friend and Trump supporter. He asked, “What is your solution to this problem? 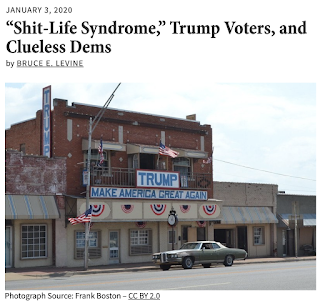 I will offer one solution below, but first, let’s define the problem. You can read the above article for yourself, but the premise of it is stated in the first sentence:

The author goes on to say,

“The Brookings Institution, in November 2019, reported: “53 million Americans between the ages of 18 to 64—accounting for 44% of all workers—qualify as ‘low-wage.’ Their median hourly wages are $10.22, and median annual earnings are about $18,000… For most of these low-wage workers… “Finding meaning in life is close to impossible; the struggle to survive commands all intellectual and emotional resources.” 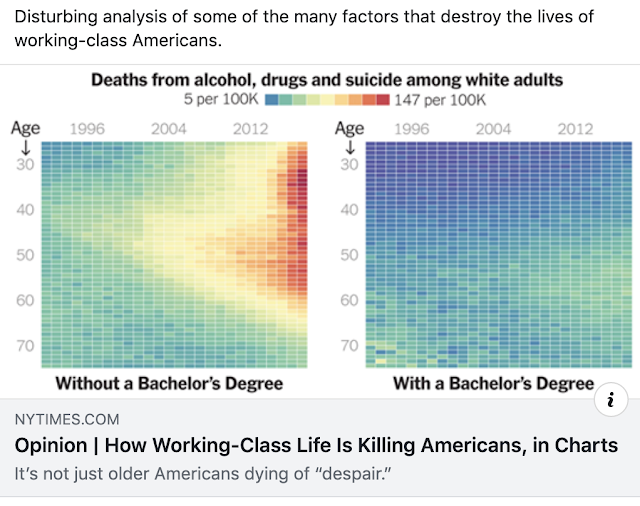 That last statement also explains part of the reason 91.7 million eligible voters didn’t vote in the 2016 election. So many of them are barely hanging on day-to-day. I have written elsewhere that for decades neither political party has addressed the needs of the 45% of all Americans who live below the middle-class. These are the people who stopped voting. Referring to non-voters, I have written elsewhere:

“For too long politics has failed to make any difference in their lives. It doesn't matter which party is in power. Nobody cares about them. For the past 30 years, politicians have only cared about the middle-class or special interest groups. Even after 10% of the voters voted for the first time in the 2016 election, 40% of all eligible voters still didn't vote. We can do better because much of this 40% were once a big part of the Democratic base. We stopped attending to the needs of the poor and working class.”

What is the solution?
No one has all of the solutions figured out, but we can start by valuing everyone who works for a living. We can start by paying the lowest wage workers a living wage for a week’s work. Hear me out.

A living wage is a market-based minimum wage index. It isn’t an arbitrary, one-size-fits-all government number. A living wage respects all regional economic conditions. A living wage in Biloxi would be lower than a living wage in the Bronx because of their different cost of living conditions. A living wage law would require business owners to provide their lowest-paid employees a sufficient wage package for full-time work so that a low wage employee is not dependent on taxpayer assistance for housing, food, essential transportation or medicine. It wouldn’t pay a mortgage, or for vacations or luxury items. It doesn’t replace competitive, merit-based wage compensation for the rest of the experienced or more skilled workforce. It sets a wage floor below which workers financially qualify for public assistance (aid to the working poor). It set the wage minimum at a level that makes an employee marginally self-sufficient and therefore it maintains the dignity of work.

Most people already agree that we must end wasteful taxpayer subsidies to wealthy corporations for all sorts of tax breaks they receive. We should start by ending labor subsidies for low pay workers in America. Let’s end government assistance to the working poor by making Corporations pay their low-wage workers enough so taxpayers don’t have to supplement workers’ income to pay the rent, put food on the table, care for their children while they work, or pay for a doctor and medicine every time their kid gets sick. When we pay a living wage to low wage parents, it frees them up to be better parents and good role models to their children.

Every time the government steps in to pay for necessities it is degrading for the workers who must request this assistance. It says to them that their employer doesn’t recognize their true worth. Their employers won’t even pay them the bare minimum it takes to live a life. This takes a toll on a worker’s self-esteem. It often forces them to work overtime or take a second job to make ends meet.
When the working poor and working-class families try and get off government assistance they are often forced to work more hours. They become absentee parents by degree. Without parental supervision, their children are less disciplined and more peer-influenced. Their children might stop doing their homework, for instance, or lose their focus on school making them less successful in school and in life. When parents aren’t home to structure their time children may start hanging out with the wrong crowd. They face greater temptations and risky behaviors that lead them into a vicious cycle of declining prospects, and the “sh*t-life syndrome” is passed along to another generation.

It traces back to the degradation and loss of dignity that so many Americans experience when they are unable to make a viable living in the world’s richest nation. The enormous wealth-gap and the huge compensation paid to CEOs in this country are all evidence that the money is there for the working poor. Paying the lowest wage worker, a living wage wouldn’t even leave a dent on the highest-paid corporate leaders or wealthiest Americans.

And for the 40% who can't imagine attaining a middle-class life or a politician really caring about them or their community, I offer this poem read on video by its author, the late, great Maya Angelou: